March is National Women’s History Month. According to our National Exchange website, women were allowed to join Exchange Club on July 4, 1985. The article below is taken from the National website and is an interesting look at our past history.

“At the 1985 Convention, National President Fred Harron presented to the delegates the recommendation of the National Board of Directors that Exchange’s bylaws be changed to permit women members.

“The law relating to the admission of women into Exchange in Minnesota and at least 36 other states is quite clear,” Harron said to the convention attendees. “Our friends, the Jaycees confirmed that when they spent in excess of a million dollars in legal fees in their unsuccessful attempt to challenge the question all the way to the United States Supreme Court. So we have three choices: either admit women into Exchange; spend hundreds of thousands of dollars to fight a losing battle in the courts; or else close up shop and get out of town in those states which insist we let the ladies in.”

“Faced with these choices and the fact that the role of women in our society has changed so dramatically since our constitution was first written, your Board of Directors decided there was only one proper choice to be made,” he continued. The delegates agreed and their affirmative vote ended a 10-year long debate and opened a new chapter in the history of Exchange.

Since that historic decision, thousands of women have joined the ranks of America’s Premier Service Club, helping Exchange make even greater progress in its community service and expansion efforts. Two of them reached the highest office, National President: Pamela Sudlow, 2003-2004; and Margaret Miller, 2010-2011.

Every day, in cities and towns across America, Exchange Club members are dynamically transforming the Exchange ideal of “Unity for Service” into direct and positive action, enhancing the lives of their fellow citizens from coast to coast. From a handful of members in Detroit, Michigan, at the turn of the century, Exchange has developed into a progressive national service organization comprised of tens of thousands of dedicated men and women.”

Entire article and additional history can be viewed at: http://www.nationalexchangeclub.org/national-exchange-club-history/#sthash.dMkqU2x4.dpuf

In celebration of National Women’s History Month, thank you all for the hard work, time and dedication to our club.

The Butte Exchange Club Fun Run will be held on Saturday, April 25th. Choose from a 5k or 1 mile run/walk. The run will begin in front of the Hennessy Market at 10:00 am. Entry fees are $20 for individuals, $30 for families, and $75 for corporate teams of five. Contact Angie Hasquet (ahasquet@cpklawmt.com) for further details.  Registration Form

Monthly meetings for the 2015 Field of Honor are just starting. The date has tentatively been scheduled for September 11 -13, 2015. According to Lauren Kippen, “we’re trying for a different type ceremony/event this year”.  Please mark your calendars and save the date.

Lauren also reminds us to save the date for our “Give a Kid a Flag” event during the 4th of July Parade. It will be here before you know it. Summer is coming!

Members of the Butte Exchange Club dressed in green and braved wind and rain to march in the annual Butte St. Patrick’s Day Parade on Tuesday, March 17th. About 20 members met at Emma Park and walked the parade route through uptown Butte. Cheers and clapping greeted our marchers all along the way. Thank you to Linda Corr-Mahugh for organizing this event.

The Highway Cleanup Committee held a cleanup event on Thursday, March 19th. The cleanup was scheduled along the highway between the Butte Chamber of Commerce and Harrison Avenue. Volunteers met at 4:30 and worked hard for 2 hours. Food and refreshments were provided to the workers after the cleanup. Thanks to Pat Cooney who organized the event and club members Elyse Lewis, Ernie Richards, Brad Rixford, Tom Daniels and Barry Kippen. 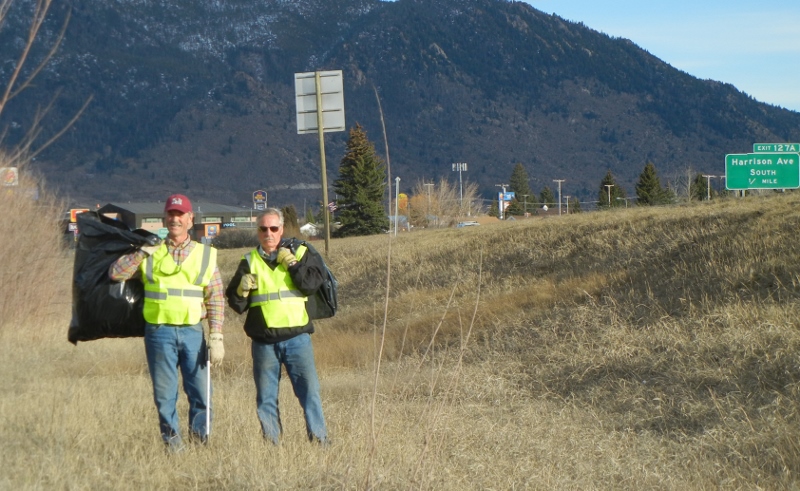 Jim Stilwell had the first informational meeting of the Butte High School Excel Club on March 11, 2015.  Sufficient students registered to proceed with formally establishing the club at Butte High. The Excel group will direct their own projects but may also assist our club with some projects. Thank you Jim for your work with the Butte High Students on behalf of the Butte Exchange Club.

The Communications Committee would like to remind you that we rely on committee chairmen and all club members to send us meeting announcements, stories and photos since we cannot be present at Club events. Please use your cell phones and capture some fun photos to send us.

Have you been using the Member Resource Page on the website?

If you enter these important addresses into your cell phone or computer you will always have Club information at your fingertips!