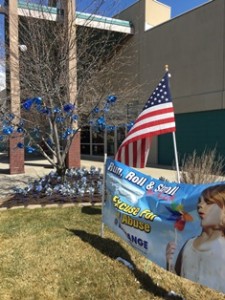 ►What is child abuse?

Child abuse can include any behavior, action or omission by an adult that causes or allows harm to come to a child. That can include physical abuse, emotional abuse, sexual abuse, and/or neglect. Individual states and other government agencies have specific legal definitions that are used to substantiate reports of alleged maltreatment.

►How many children are reported and investigated for abuse or neglect?

In 2011, 3.4 million referrals, involving more than 6.2 million children, were made to Child Protective Service (CPS) agencies. More than 55% of these reports were made by professionals such physicians, teachers, and social service workers.

►How many children are victims of maltreatment?

An estimated 681,000 children in the 50 states, the District of Columbia and Puerto Rico were determined substantiated victims of abuse or neglect in 2011.

►What does it mean to substantiate an allegation of abuse?

►Is the number of abused or neglected children increasing?

The number of substantiated victims has fluctuated by approximately 0.9% since 2002. The numbers cited here are from the 2011 Child Maltreatment Report published by the U.S. Department of Health and Human Services. Increases may be related to actual increase of incidents, better reporting by states, or greater recognition and reporting of child abuse within communities, while decreases may indicate reduction in incidents, poor reporting by states, or changes in definitions regarding substantiated cases.

Statistics continue to show that a child abuse victim is at high risk of suffering repeated abuse or neglect. Through the Child and Family Services Review, the Children’s Bureau has established the current national standard for recurrence as 94.6%.

It is challenging to acquire comprehensive statistics regarding the true incidence of child abuse. Currently, the Department of Health and Human Services is conducting a study aimed at collecting statistics from various agency sources to develop a more accurate picture of the incidence of child abuse and neglect across the country. These new sources include law enforcement agencies, tribal jurisdictions, and other social service agencies that are not included now.

►What are the most common types of maltreatment?

►How many children die each year from child abuse?

During 2011, an estimated 1570 children died from abuse or neglect. Of those, 75.7% were younger than four years old. This number may not accurately reflect the actual number of fatalities due to abuse and neglect. Many researchers and practitioners believe child fatalities due to abuse and neglect are still underreported. Studies in Colorado and North Carolina have estimated that as many as 50 to 60 percent of child deaths resulting from abuse or neglect are not recorded as such (Crume, DiGuiseppi, Byers, Sirotnak, Garrett, 2002; Herman-Giddens, Brown, Verbiest, Carlson, Hooten, et al., 1999).

►Who abuses and neglects children?

In 2011, exactly 81.2 percent of perpetrators of child maltreatment were parents, and another 12.8% were relatives or caregivers of the child. Caregivers includes foster parents, child daycare providers, and legal guardians.

Mothers comprised a larger percentage of perpetrators, 36.8% compared to fathers, 19%, however 18.9% of cases indicated both parents were involved. Nearly one-half of all victims were White (43.9%), 21.5% were African-American, and 22.1% were Hispanic.
Child maltreatment occurs across socio-economic, religious, cultural, racial, and ethnic groups.

It is difficult to imagine that any person would intentionally inflict harm on a child. Many times, physical abuse can result when the physical punishment is inappropriate for the child’s age, and parents have an unrealistic expectation of their child’s behavior. A parent feeling undue stress may also react inappropriately. Most parents want to be good parents but sometimes lose control. Child abuse can be a symptom that parents are having difficulty coping with other situations, such as those involving finances, work, or housing.

A significant factor in many situations relates to a parent’s inexperience with or lack of understanding of typical child development. Many childhood behaviors can be frustrating but are normal. Lack of understanding about normal behaviors may lead a parent to react in a punitive manner. Parents with their own negative childhood experiences may not have healthy role models to follow.
Other stress factors in the home may increase the risk of abuse or neglect, also. These can include drug or alcohol abuse, family crises, marital difficulties, domestic violence, depression or mental illness.

►Are victims of child abuse more likely to engage in criminality later in life?

Victims of child abuse are likely to experience a wide variety of negative outcomes throughout their lives. Involvement in criminal activity is one. For children, the National Survey of Child and Adolescent Well-Being found that children placed in out-of-home care due to abuse or neglect tended to score lower than the general population on measures of cognitive capacity, language development, and academic achievement (U.S. Department of Health and Human Services, 2003).
Other studies have found abuse and neglected children to be at least 25% more likely to experience problems such as delinquency, teen pregnancy, low academic achievement, drug use, and mental health problems.

In one long-term study of young adults who had been abused, as many as 80% met the diagnostic criteria for at least one psychiatric disorder at age 21. These young adults exhibited many problems, including depression, anxiety, eating disorders, and suicide attempts (Silverman, Reinherz, & Giaconia, 1996). Other psychological and emotional conditions associated with abuse and neglect include panic disorder, dissociative disorders, attention-deficit/hyperactivity disorder, posttraumatic stress disorder, and reactive attachment disorder (Teicher, 2000).

The challenges that victims experience continue as they move into adulthood. The U.S. Department of Justice, Bureau of Justice Statistics reports the following adult statistics for 2002:
• 31% of jail inmates had grown up with a parent or guardian who abused alcohol or drugs.
• About 12% had lived in a foster home or institution.
• 46% had a family member who had been incarcerated.
• More than 50% of the women in jail said they had been physically or sexually abused in the past, and more than 10% of the men.
• The National Institute on Drug Abuse reports that nearly two-thirds of all adults entering treatment for drug abuse report being victims of child abuse or neglect.

►Is there any evidence linking alcohol or other drug use to child maltreatment?

There is significant research that demonstrates this connection. Research has shown that among confirmed cases of child abuse and neglect, 40% involved the use of alcohol or other drugs (Journal of American Medical Association, and Children of Alcoholics). Substance abuse does not cause child abuse and neglect, but it is a distinct factor in its occurrence.

►Can we prevent child abuse and neglect?

Yes, we can make a difference. There are many types of prevention programs across the country. Research has shown that effective programs share similar elements, such as working with families early and on a long-term, intensive basis. Effective programs offer assistance with family problems, refer families to outside supports when needed, and have a structured framework for staff in working with families. These elements are found in the National Exchange Club Foundation’s Parent Aide home visitation program model. The Parent Aide Program is the signature program of NECF and is offered at all of the Exchange Club Child Abuse Prevention Centers across the country. You can make a difference as you support NECF’s Child Abuse Prevention Centers and the Parent Aide Program.

►Where can I find more information?

The “Garbage Guys” (Highway Cleanup Committee) will be holding cleanups every Friday morning at 8:30. Meet at Perkins. If you have questions, contact Pat Cooney (patrick0049@charter.net).

The Child Abuse Prevention Committee meets every Tuesday at 5:15 PM at Sparky’s. Contact Marie Kagey-Shutey (mshutey@cpklawmt.com) if you’re interested in helping out.

Congratulations to ECB member Jim Stilwell for being named District Exchangeite of the Year!

This year’s Child Abuse Prevention Fun Run has been moved to May. Stay tuned for more details.

Please review the Club Roster. If your information is incorrect please correct it by accessing your Profile on the National Website. To access the National Exchange Club website go to http://www.nationalexchangeclub.org/ and click the “Member Login” tab. To update your information click on the “My Profile” tab. This March 2016 Roster is also available on the Butte Exchange Website www.ButteExchangeClub.org in the Member Resources Section. The Password for that section is “ Exchange59701 “ (case sensitive).

The program Committee is looking for speakers. If you have an idea or topic you would like to hear about, please contact Holly McCamant at hollymccamant@yahoo.com or Doug Rotondi@djrotondi@gmail.com or any of the members of the Program Committee.

Each year, club presidents rely on members of the organization to assist with the many duties and responsibilities required by club presidents. This year, Lauren presented Special Merit Awards for Outstanding Service to:

A Special Merit Award for Outstanding Service was also presented to Lynn Sullivan for chairing the Student of the Year Program.  Lynn works closely with the schools and counselors to determine qualified candidates for the program.  She has also dedicated countless hours and demonstrated a high level of professionalism for both the program and the banquet.

Thank you John and Lynn for your continued exceptional service to our club, community and youth of Butte. 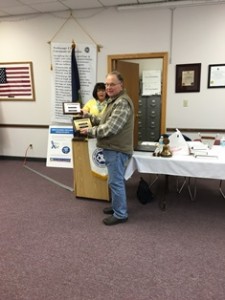 Lauren also presented awards to those members of the club who went out of their way to be of special assistance to her during her term. Those club members are:
Elyse Lewis; Linda Corr-MaHugh; Leo Prigge; Brad Cedarburg, Doug Rotondi and Andy Durkin (not in the photo) 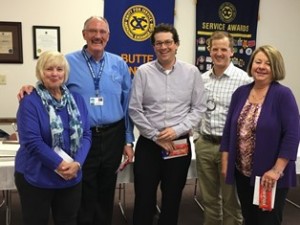 The final award of the meeting was the Exchangite of the Year Award. This award is presented to a club member who has consistently worked for the betterment of the club. This year’s winner is Tom Daniel.

Tom has been a member since the 1970’s and has served on most of our committees and in most of the officer positions. He does not like the spotlight but would rather lead by example. He participates on many committees including the FunRaiser, Membership Program; and the Phillipsburg Theater Trip.  According to our President Lauren Kippen,  “Tom Daniel was chosen for our Butte Exchange Club Exchangite of the year because of his participation in our club activities and for his love of Exchange in general.

This past year, Tom was found helping in almost every club project that we did. He’s been extremely instrumental on our Field of Honor committee and is Chairman of the National Day of Service and Club Steak Fry Social Committees. He’s been active with beautifying Butte by planting flowers and helping clean up our streets and highways by picking up garbage! And these are just to name a few! I have come to know Tom Daniel, not only as a co-member of Exchange, but also as a business leader in our community. I’m personally honored to know a man of Tom Daniel’s integrity and proud to call him ‘friend’.  What he does as a volunteer in our club, helps to change the way people live and experience the ‘Butte way of life’. He simply makes Butte a better place to live with his volunteer work.”

Congratulations Tom and thank you for your outstanding service. 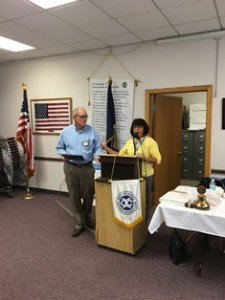 The Child Abuse Prevention Committee social was held Wednesday April 20th at The Quarry Grand Ballroom. Festivities began at 5:00. Beer, wine, and appetizers were served.
Many Exchange Club members donated toiletries and diapers to help with needs of children who have been displaced from their homes by DFS. 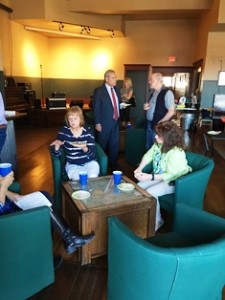 The Communications Committee would like to remind you that we rely on committee chairmen and all club members to send us meeting announcements, stories and photos since we cannot be present at Club events. Please use your cell phones and capture some fun photos to send us.
Please send all details on upcoming events & speakers to: info@butteexchangeclub.org
If you have taken photos at Club events that you want to share, please send them to:info@butteexchangeclub.org (cell phone shots are OK)
Need help? Call: Elyse Lewis –Public Relations Chairman – 565-0801
Bulletin Editor – Penny McElroy
Mobile: (406) 490-1946 Home: (406) 494-2731
E-mail: pamcelroy7@gmail.com