On Saturday June 11th the Butte Exchange Club will be helping out the Butte Squadron of the Civil Air Patrol hold a fundraiser pancake breakfast during the Butte Wings and Wheels fly-in and car show at the Bert Mooney Airport. The Butte Exchange Club has agreed to help cook and serve the breakfast. The Civil Air Patrol will provide all supplies. We have agreed to staff two shifts, from 6:00 to 8:30 am and 8:15 am to 10:45 am. Sign-up by contacting club member John Chioutsis. 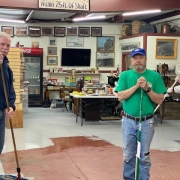 This winter, the Garbage Gang continued its work at the World Museum of Mining. The hardworking group, including Jim Stilwell, Pat Cooney, Ernie Richards, Dave Daugherty and volunteer Jay Cornish, painted the floor of the Museum Headquarters building.

Spring is here and the Garbage Gang is starting to pick up litter, now that the snow is mostly melted. On Thursday March 31 the group held its first litter pickup of the season. Jim Stilwell, Ernie Richards, Dave Daugherty, Lee Walsh, John McBride and volunteer Jay Cornish removed a pickup truck full of litter from only a block or so along Howard Street. 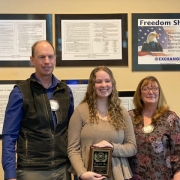 This year’s Youth of the Year and ACE Award Luncheon was held on March 22nd in the lobby of the Burt Mooney Airport in Butte. The Butte Exchange Club has had a long-standing association with the airport including installing the first landing lights at the airport in the 1920’s. Keith Miller, Principal of East Middle School and a former Butte Exchange Club Youth of the Month was the Keynote Speaker for the luncheon attended by approximately 50 Club members and guests.

The theme for this year’s National Exchange Club Youth of the Year Program is:
“The COVID-19 Pandemic drastically changed every aspect of our lives, in every imaginable way. Reflecting on what you learned during this time about yourself, your community and the world, explain how your perspectives on success, empathy, prioritizing, social inequities, and leadership have been reshaped.”

Seven Butte students submitted essays in response to this theme and filled out detailed applications which documented their student activities and community service. Sydnie Byrnes, a senior at Butte High School and a 4.0 student, was selected as the Butte Exchange Club Youth of the Year and the recipient of a $2,000 scholarship.

The other scholarship award presented was the ACE Award which stands for Accepting the Challenge of Excellence and is awarded to Butte’s turn-around student of the year. Our three candidates made their presentations to the Club on February 22nd. Evan Pentacost described the impact of losing both of his parents in an automobile crash with a drunk driver when he was 6 years old. McKinsie Mason talked about the unexpected loss of her father from a fall when she was a young teenager. The final candidate, Max Demaris, talked about losing an eye due to a tumor.