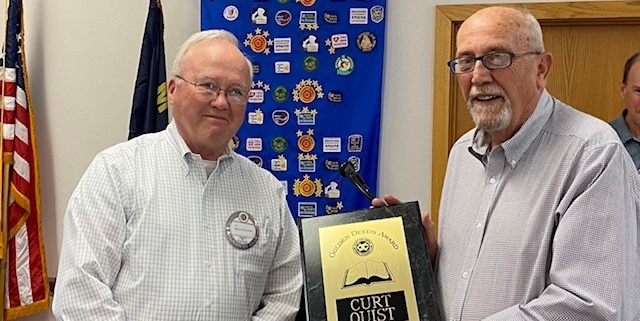 The Golden Deeds Award is given annually by the Exchange Club of Butte to a member of the Butte community who has dedicated significant time and effort to the betterment of the community and its citizens, often with little public recognition.

Curt Quist is this year’s recipient of the Book of Golden Deeds. Curt was instrumental in founding the Food Is Sharing Hope (FISH) program at Gold Hill Lutheran Church, a precursor to the Butte Emergency Food Bank. He served on the Board of the Human Resources Development Council as they established the Homeward Bound facility and program in the early 1990s. He also served on the Board of the Butte Public Housing Authority and currently serves on the National Affordable Housing Board and the Homeless Advisory Committee.

For many summers he led groups of teens to Seattle, as part of a program of Flathead Lutheran Bible Camp, to work in a homeless shelter. For most of these kids, it was their first face-to-face contact with the homeless.

About 3-1/2 years ago Curt established the Butte Furniture Bank, a non-profit organization that collects unwanted, gently used furniture and household items and delivers them to people who may be in need of furnishings due to fire, illness, job loss, domestic violence relocation, or relocation into community housing. This project has benefitted many low-income clients while also relieving the landfill of tons of waste.

Curt is a fifty-year resident of Butte and he and wife Jeanette recently celebrated their 50th wedding anniversary. They have three children and seven grandchildren. Congratulations Curt!

Give a Kid a Flag to Wave
Scroll to top